On April 16th, ACR staff traveled to Pasadena, California, to meet with Congresswoman Judy Chu (D-CA) and local nonprofit leaders to discuss the alarming data around charitable giving in America. Rep. Chu is a member of the House Ways and Means Committee, which has jurisdiction over the charitable sector. Rep. Chu helped found the nonprofit Asian Youth Project in 1989, and has remained an active participant in her local charitable community. 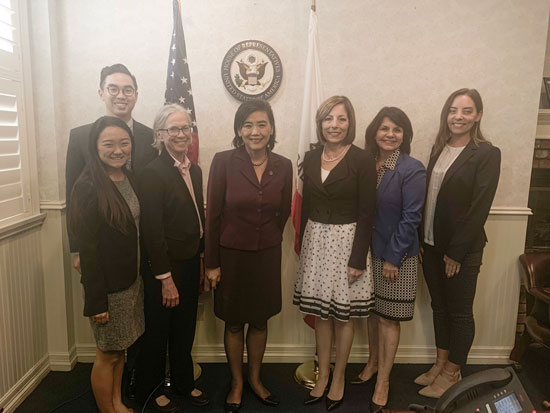 ACR was joined by representatives from Southern California Grantmakers, the California Association of Nonprofits, and the YMCA of West San Gabriel Valley, all of whom discussed the importance of charitable giving to their organizations, members, and grantees. They shared fundraising struggles due to uncertainty from donors, as well as news about the tough decisions grantmaking organizations are having to make given increased demand from public charities.

While several lawmakers have acknowledged the alarming decline in Americans giving to charity, and the risk of even less charitable giving since the 2017 tax bill, it’s important to continue to engage with lawmakers so our sector remains top-of-mind. Given Rep. Chu’s deep knowledge of the nonprofit sector, the Congresswoman understood these concerns and committed to finding out what the Ways and Means Committee has planned to address them.

The Congresswoman and staff also shared that the repeal of unrelated business income tax (UBIT) on parking and transportation fringe benefits is a top priority of the Ways and Means Committee. You may recall, many nonprofits find themselves having to pay tax for the first time due to this provision in the 2017 tax bill that imposes a tax on benefits provided to employees.

ACR will continue its district engagement project with other tax writers around the country, and we encourage you to take a look at our Roadmap for Action to see what you can do to help.