Giving USA released its annual report June 12, showing that nationwide charitable giving continues a steady increase since 1977. Charitable giving reached a record high in 2017, crossing the $400 billion mark for the first time. The $410.02 billion that Americans gave to charity in represents an increase of 5.2 percent over giving from 2016. We share some data from the report below that stood out to us. 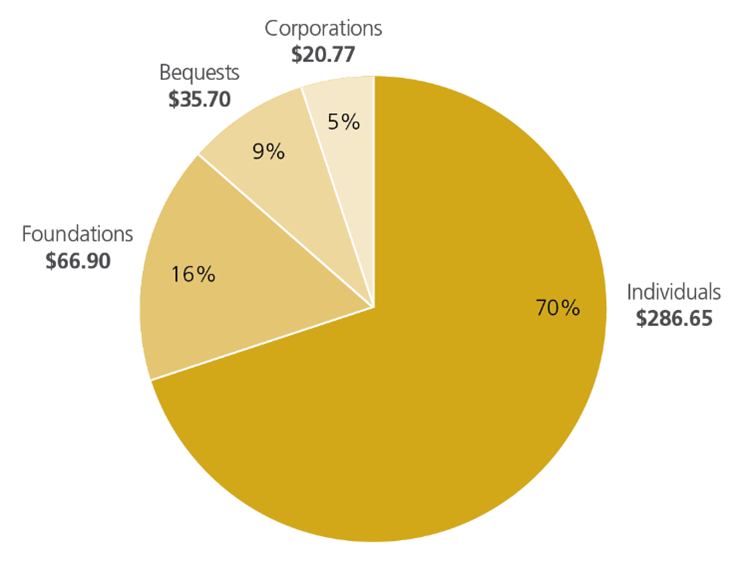 Charitable contributions from individuals totaled an estimated $286.65 billion, increasing 5.2 percent in 2017. The report states, “Itemized giving comprised 84.4 percent of the total estimate for giving by individuals. Giving by both itemizing and non-itemizing households increased, at 5.6 percent and 3.3 percent, respectively.”

Giving by foundations rose 6.0 percent, to an estimated $66.90 billion in 2017. These figures are provided by the Giving USA Foundation Center. “Grantmaking by operating foundations and independent foundations also increased, at 6.2 percent and 4.9 percent, respectively,” the report states.

The Impact of the Tax Cuts and Jobs Act

Full implementation of the Tax Cuts and Jobs Act (TCJA) did not occur until January 2018, but its passage still may have affected giving at the end of 2017. Below are three primary provisions outlined by the Giving USA report that may affect charitable giving by individuals/households:

Decreased the top marginal tax rate for individuals and couples from 39.6 percent to 37 percent.

Decreasing the top marginal tax rate could lead to a slight decline in individual/household giving by reducing the financial incentive to give for some high-income givers.

Capping the state and local income, sales, and property tax deduction at $10,000

Using data from Gallup’s World View World Poll, the Charities Aid Foundation (CAF) World Giving Index 2017 gathers data on charitable giving and other philanthropic activity from 139 countries over a 5 year period. Overall, the CAF World Giving Index 2017 reports a decline in global giving from 2016. The United States ranked fifth in overall philanthropic activity with a score of 56 percent in 2017, a drop from ranking second in 2016. According to data from the CAF World Giving Index 2016, Myanmar topped the rankings for the fourth consecutive year; followed by Indonesia, Kenya, New Zealand, and the United States holding up the end at number five.

The United States has seen a steady decline in the number of Americans giving to charity over the last decade, a statistic reflected in the World Giving Index.