Data on Giving Starting to Come In, Along with Some Red Flags

Since the passage of the Tax Cuts and Jobs Act (TCJA), we get one universal request when we meet with lawmakers: send us the data. They want to see concrete numbers painting a clear picture of the impact of the TCJA on charitable giving. The problem is that we won’t have a clear picture of this data for several years, but there are a few warning signs in the little data we do have.

Let’s start with this article from Harold Brubaker of the Philadelphia Inquirer on whether the 2017 tax law changed the way Americans gave to charity. Brubaker reports on an early assessment report recently released by Blackbaud, which found that giving in 2018 increased by 1.5 percent.

“There was certainly a lot of talk and speculation about whether charitable giving would significantly decrease because of tax law changes in 2017,” said Steve MacLaughlin, vice president of data and analytics at Blackbaud Inc. and senior adviser to the affiliated Blackbaud Institute. “I think what this first real look at the data shows is, no, that didn’t happen.”

Estimates of giving by both Giving USA and the Blackbaud Institute continue to show single digit growth rates on a year-over-year basis. Through April 2018, the Blackbaud Index estimates that charitable giving is up 4.7% compared to 2017.

For giving to fall from a 4.7 percent year-over-year increase in April to only a 1.5 percent increase just eight months later is certainly an alarming trend.

A study released today from the Fundraising Effectiveness Project (FEP), an initiative founded by the Association of Fundraising Professionals (AFP) and the Urban Institute, found a similar increase of 1.6 percent in giving for 2018. However, as the Chronicle of Philanthropy reported, the FEP study also pointed out that the increase fails to keep pace with the rate of inflation. Additionally, while contributions of $1,000 and up grew by 2.6 percent, donations of $250 to $999 fell by 4 percent, and gifts under $250 fell by 4.4 percent. Small and midsize gifts, which tend to come from low- and middle-income givers, are drying up.

We also know Americans are only now learning about the impact the TCJA is having on their personal taxes. There continues to be accounts of Americans surprised by the change in their tax refunds – and as Richard Rubin reported today in the Wall Street Journal, it will take time for Americans to understand how the new tax law treats charitable gifts.

It could take a year or longer for donors and nonprofits to adjust, said Una Osili, associate dean of research at Indiana University’s Lilly Family School of Philanthropy. “It will take some time for both sides to fully adapt, modify, respond to the tax changes,” she said.

Perhaps most alarming is the fact that we keep getting confirmation of one particular shift in giving behavior from 2018: changes in end-of-year giving. A few weeks ago, we wrote about a poll from AFP that found, among other things, that there were fewer gifts in the fourth quarter in 2018, which is the key giving season of the year. This finding was confirmed from the FEP study released today that found a 7.3 percent decline in new donors in the last quarter of 2018.

This trend is also reflected in the Blackbaud Index, which shows a 2.3 percent drop in overall giving in December 2018 compared to December 2017. 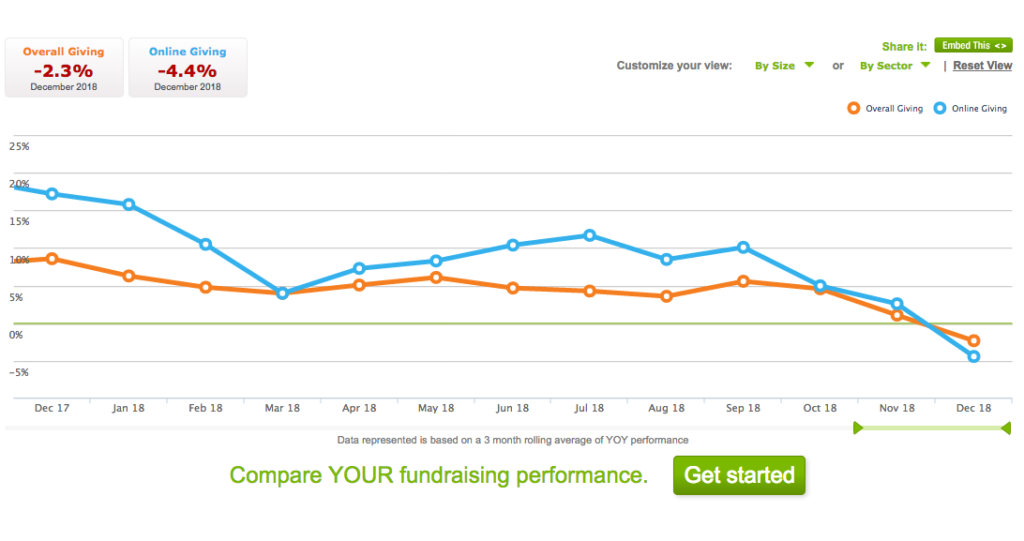