One of the claims being made during the debate over tax reform and its likely effect on charitable giving is that any reduction in donations due to the increased standard deduction (estimated by a couple of sources to be between $12 billion and $20 billion annually) will be made up for by increased economic growth.

Because the share of GDP that Americans give to charity each year has been relatively stable, about 2.1 percent in recent years, and a slightly lower percentage caused by the increased standard deduction would be applied to a bigger economy, total dollars given will remain the same overall or perhaps even increase – or so goes the argument. But a quick analysis of the expected (by proponents) growth shows that this isn’t likely to be the case. With apologies, I now begin the math portion of this post.*

In 2016, the most recent year for which we have data, Americans gave about $390 billion to charity, roughly 2.1% of the $18.569 trillion economy. Using these numbers, and picking the mid-point of the estimated decline in giving due to tax reform ($16 billion), it appears that a doubled standard deduction would knock giving down to $374 billion, or about 2.0% of GDP.

Most economic forecasts seem to think that growth of around 2% is likely for the foreseeable future. Those forecasts generally don’t include the tax cuts being considered at the moment, however. Fortunately, several estimates have been put out, including by organizations generally supportive of the tax cut plan. They mostly seem to predict the same thing, and because they lay it out so neatly I’ve chosen the Tax Foundation’s estimates from earlier this month, which project that over the long run, GDP growth will be boosted by 3.7% over the next decade.

At first glance that’s not far from the 4.3% rate needed to make up for the decline in charitable giving, but that 3.7% figure is an aggregate over ten years, not the addition to the annual growth rate.

Here’s the graph the Tax Foundation includes in its analysis: 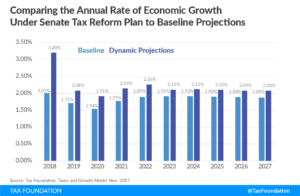 A letter in The Wall Street Journal earlier this week had similar conclusions. Signed by nine prominent economists who support the tax cuts, it said:

A conventional approach to economic modeling suggests that such an increase in the capital stock would raise the level of GDP in the long run by just over 4%. If achieved over a decade, the associated increase in the annual rate of GDP growth would be about 0.4% per year…

Assuming these estimates are in the right ballpark, it’s clear that the projected economic growth from the proposed tax cuts will fall dramatically short of the 4.3% annual net increase needed to make up the lost charitable contributions caused by the doubling of the standard deduction.

The great Jewish rabbi and scholar Moses ben Maimon, more commonly called Maimonides, wrote that “the greatest level [of charity], above which there is no greater, is to support a fellow Jew by endowing him with a gift or loan, or entering into a partnership with him, or finding employment for him, in order to strengthen his hand so that he will not need to be dependent upon others…” Tax reform that expands employment, lending, and the creation of new firms certainly fits well within that paradigm, and the rough analysis here shouldn’t be read as opposition to the tax plans being considered. But it does indicate that economic growth alone (which is desperately needed) won’t be nearly enough to ensure tax reform does no harm to the charities that heal the sick, feed the hungry, shelter the homeless, enrich the culture, educate citizens, and sustain faith.

Fortunately, there is a relatively simple fix, a “Universal Charitable Deduction” that would allow all Americans to deduct their charitable giving regardless of whether they itemize. Legislation sponsored by Senator James Lankford and Congressman Mark Walker would protect civil society by preventing a severe drop in charitable contributions, and hopefully Congress will do the right thing and incorporate the language of their legislation into any tax reform bill that passes.

*The methodology here is fairly simple, and doesn’t incorporate things like inflation or otherwise make adjustments for expected growth. I could have, for example, projected what giving is expected to be in 2018 based on a 2.1% share of anticipated GDP in 2018 without tax cuts and a 2% share of anticipated 2018 GDP with tax cuts. But these sorts of adjustments wouldn’t substantially change the numbers or conclusions, but would require more calculations and explanations that would add considerably to the length of the post without adding to the understanding, so I’ve kept it simple.