The last post in ACR’s Tax Day series examined the anecdotal data surrounding the impact of the Tax Cuts and Jobs Act (TCJA). While anecdotes are helpful, many lawmakers only want to see quantitative data. They want the concrete numbers painting a clear picture of the impact of the TCJA on charitable giving. The problem is we won’t have a clear picture of this data for several years, and by then, it could be too late. However, we do have some preliminary data, which indicate there may have been a negative effect on charitable giving.

A study released in the same month from the Fundraising Effectiveness Project (FEP), an initiative founded by the Association of Fundraising Professionals (AFP) and the Urban Institute, found a similar increase of 1.6 percent in giving for 2018. However, as the Chronicle of Philanthropy reported, the FEP study also pointed out that the increase failed to keep pace with the rate of inflation. Additionally, while contributions of $1,000 and up grew by 2.6 percent, donations of $250 to $999 fell by 4 percent, and gifts under $250 fell by 4.4 percent. Small and midsize gifts, which tend to come from low- and middle-income givers, who were most likely to lose the charitable tax deduction, appear to be drying up – a topic we examined in part 2 of our Tax Day series.

Perhaps most alarming is the confirmation of one particular shift in giving behavior in 2018: changes in end-of-year giving. A poll from AFP surveying 2018 fundraising found that, among other things, there were fewer gifts in the fourth quarter in 2018, which is the key giving season of the year. This finding was confirmed from the FEP study that found a 7.3 percent decline in new donors in the last quarter of 2018.

This trend is also reflected in the Blackbaud Index, which showed a 2.3 percent drop in overall giving in December 2018 compared to December 2017. 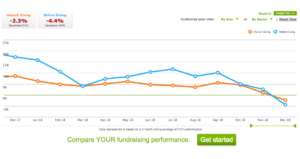 The early data on 2018 giving is more startling when stacked up on other long-running trends of concern. Research by the Lilly Family School of Philanthropy at Indiana University found that in 2006, 66 percent of American households gave to charity. By 2014, that number had dropped to just 56 percent.  A study of IRS data by the Chronicle of Philanthropy found that only 24 percent of taxpayers itemized charitable deductions on their tax returns in 2015. That number is down from over 30 percent just ten years prior. This series has already discussed how the number of itemizers is anticipated to drop below 12 percent with the expanded standard deduction.

The data is preliminary but it is compelling. The number of Americans who give to charity continues its decade-long decline, overall charitable giving in December appears to have declined in 2018, charitable giving is becoming more concentrated among the wealthy, and as more Americans come to understand how the tax treatment of charitable gifts has changed, we worry the ultimate result will be a drop in charitable giving.

In the final post in ACR’s Tax Day series, we’ll examine legislative proposals aimed to spur more charitable giving and offer a look at the road ahead.