Earlier this month lawmakers passed a bipartisan budget deal that would lift spending levels for defense and non-defense programs over the next two years, suspend the debt ceiling (America’s credit card limit) until March 2019, and fund the government through March 23.

Although this is yet another short-term deal for government funding, this bipartisan deal sets the stage for a long-term spending bill, giving the House and Senate until March 23 to craft an omnibus – a package that funds every government agency – to last through September. We expect much of Congress’s focus to remain on passing the long-term passage until the March deadline.

In other budget news, the president released his budget blueprint on Monday, February 12. While the president’s budget has no force and effect of law, it serves as a roadmap of his Administration’s priorities. The president’s blueprint proposed a $4.4 trillion federal budget for fiscal year 2019 and includes decreased funding for entitlements and other domestic programs in favor of higher spending for defense and border security.

Universal Charitable Giving Act
Rep. Mark Walker (R-NC) and Sen. James Lankford (R-OK) introduced the Universal Charitable Giving Act in 2017. They remain committed to pursuing their legislation this year. The legislation, which provides a charitable deduction to non-itemizers with a cap set at one-third of the standard deduction, currently has bipartisan support in the House with a total of ten cosponsors. Senator Lankford is still working to garner support in the Senate.

ACR remains committed to working with these offices and our colleagues in the sector to urge lawmakers from both sides of the aisle to cosponsor the legislation.

State-level SALT Workarounds
As you may recall, various high-tax states have proposed ways to work around the new cap on the State and Local Tax Deduction by creating charitable funds that taxpayers could donate to in lieu of paying state and local taxes. On Thursday, February 15, New Jersey introduced and quickly advanced legislation that would permit local governments to create charitable funds to which residents could donate and receive a state-level credit toward their property taxes, effectively allowing them to label the payments as charitable contributions on their federal taxes. The Internal Revenue Service and practitioners are questioning the legality of this approach, and the Treasury Department announced it is considering putting these states on notice that they should not form these funds.

Although no notices have been enacted, acting IRS Commissioner David Kautter discussed the issue on Wednesday, February 14, during a Senate Finance Committee hearing on President Donald Trump’s proposed budget blueprint. Kautter stopped short of calling out the high-tax states, such as California and New Jersey, but he did specify that a charitable contribution needs to be given for truly charitable purposes and out of generosity in order to be eligible for a tax deduction.

Treasury could issue formal guidance to head off the maneuvers, though Kautter says it’s too early in the process for that, or the alternative is to audit taxpayers after they claim the benefits on their federal returns. We encourage you to read this post from Sean Parnell, our vice president of public policy, for a detailed explanation of the details and concerns with the SALT workaround proposals.

ACR Summit for Leaders
The anticipation is building for the 2018 ACR Summit for Leaders, which will be held as part of United Philanthropy Forum’s annual Foundations on the Hill on March 13. In case you missed it, we encourage you to review the updated agenda for the event. Our three panels feature leaders in philanthropy, policy experts, and congressional staff.

Registration: To register for the ACR Summit as well as other events of Foundations on the Hill, click here. Attendance at the ACR Summit is free of charge.

Consider This – How About Never?

Our all-time favorite New Yorker cartoon, hands-down, is this: 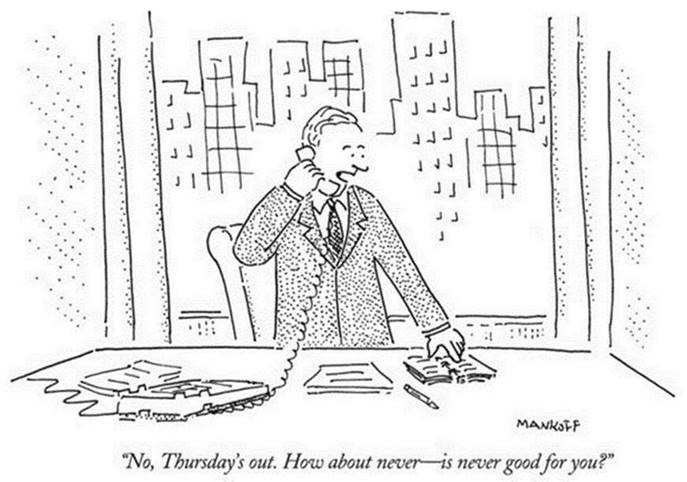 Sure, we all feel that way some of the time, but there are some things that just can’t be ignored. Everybody knows that, including Congress. And to be clear, this has not been a do-nothing Congress what with the tax reform bill, critical nominations getting confirmed, and averting a debt ceiling crisis (at least for the next year).

But there are several other issues that are starting to feel intractable. What do we do about immigration? Infrastructure?  Gun violence?  Entitlement reform? Those are all issues that loom so large they may be impossible to tackle. At least in the politics of now as we know it.

But what about other issues like the potentially unintended consequences of the tax bill that just passed?  Many key policymakers are convinced that the tax bill will maintain charitable giving at previous levels.  If that is not the case – and we fear it will not be – we hope and expect policymakers to be open to accepting that and making accommodations. Even though we won’t have immediate evidence showing a decline in giving, as it will take time for the effects of the tax bill on charitable giving to make themselves known, we do believe that giving should be universally recognized under our tax laws. That is why we are continuing work to support a universal charitable deduction to encourage all to give, and for those who already give, to give more.

Over the next few months we’ll be working to sign up support for the bills introduced by Senator Lankford (R-OK) and Congressman Meadows (R-NC) to do just that. On this issue, we are hoping now, not never, will be when policymakers act on charitable giving.