This week, the Alliance for Charitable Reform and The Philanthropy Roundtable brought foundation and nonprofit leaders to D.C. for a two-day event dubbed “Champions for Charity.” On Wednesday evening, leaders dined with members of the press at an off-the-record event to further develop relationships that we hope will help keep a well-informed media on our issues. See Consider This for more.

On Thursday, our guests attended meetings with key Congressional members to discuss the importance of maintaining – and even expanding – the value of the charitable deduction in tax reform. Those members included Rep. Tom Reed (R-NY), Ways and Means Chairman Kevin Brady (R-TX), House Republican Conference Chairwoman Cathy McMorris Rodgers (R-WA) and the office of Senate Majority Leader Mitch McConnell (R-KY). They also took the same message to the Treasury Department, where they met with Justin Muzinich, a counselor to Treasury Secretary Steven Mnuchin. Discussions in these meetings were positive – foundation leaders shared with lawmakers the critical role the philanthropic sector plays in civil society and the harm that could be done if the charitable deduction is not expanded in tax reform.

According to Politico, Chairman Brady told reporters on Thursday that GOP tax writers are giving “very serious thought” to the idea of allowing all taxpayers to take a charitable deduction. “At all income levels, we want to encourage Americans who are incredibly generous already to give more, to give earlier in life,” Brady said.

To cap off the two-day event, attendees participated in a listening session with Vice President Mike Pence and White House Legislative Affairs Director Marc Short to discuss the sector and its priorities in tax reform. During this time, our leaders were given a chance to make the case for an expanded charitable deduction and have an open dialogue with the Vice President and Legislative Affairs Director about tax reform and its implications.

In his opening remarks, Vice President Pence said, “For 30 years, the Philanthropy Roundtable has mustered the power of private charity to advance liberty, opportunity, and personal responsibility.  And the contributions of the foundations represented around this table are immense and have changed lives across this country in incalculable ways.” He added, “The causes you support make a difference in communities large and small.”

ACR is encouraged by the Vice President’s willingness to exchange ideas with us, and we look forward to continuing this conversation with the Vice President and Administration as they tackle tax reform this year.

On Thursday, July 27, at 3:00pm EDT, ACR will host a webinar on the potential implications the Camp Draft could have on tax reform this year. We will be joined by Sandra Swirski, executive director of ACR, and Alex Reid, an ACR Advisory Council member and partner at Morgan Lewis.

You may recall the Camp Draft was a 2014 legislative proposal released by then-Ways and Means Chairman Dave Camp (R-MI), which included several proposals that would affect the charitable sector. Alex and Sandra will discuss these provisions and advise on which ones could be under consideration for tax reform this year.

To register for the event, please email Marques Chavez at mchavez@philanthropyroundtable.org.

The ACR team continues the search for cosponsors on this legislation as well as the CHARITY Act, and we’ll keep you updated as more cosponsors are added. 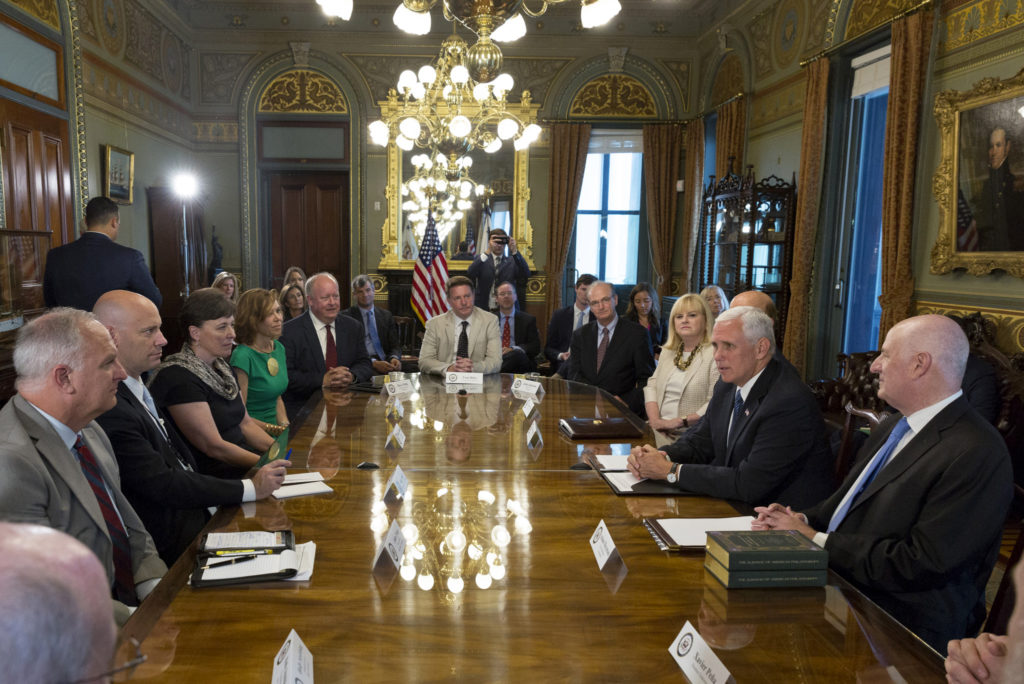 Is it a humble brag to say that The Philanthropy Roundtable took the Hill and the Administration by storm this week?  Or just a brag?  Either way, a group of seasoned and energetic TPR representatives hit it out of the park in DC on Wednesday and Thursday.

Despite temperatures hovering near 100 degrees, our group stayed energetic and on point.  Starting with a salon style dinner with key members of the press covering our sector, our group was able to engage in meaningful, off-the-record conversation about the importance of the charitable sector.

Salon style dinners might be considered a thing of the past, but the overwhelming interest was a pleasant surprise. And perhaps a message that no-pressure dialogues are the way to kick-start great relationships and maintain a well-informed media.

The events continued with high-level meetings with House and Senate leaders and concluded with a listening session with Vice President Pence.

We’re delighted to report that message was well-received. We even heard from Chairman Brady that tax writers are giving “serious thought” to our proposal. Maybe this time next year we’ll be flying leaders in to thank these lawmakers for championing charity and expanding the deduction.