Senate Republicans have indicated they’re not interested in another shutdown, and Senate Majority Leader Mitch McConnell said recently that he doesn’t like shutdowns and hopes they will be avoided. However, Speaker Nancy Pelosi (D-CA) reiterated her “no wall” stance last week. The negotiations – and head-butting – are likely to continue until the deadline.

Bottom line: We don’t expect another shutdown this week.

State of the Union

President Donald Trump delivered his second State of the Union address last Tuesday evening. His speech, which called for unity and compromise, covered bipartisan issues such as infrastructure and prescription drug pricing, while also renewing his call for a wall on the southern border. The speech was light on tax policy other than tying 2017’s tax reform to the strength of the economy. Specifically, the President briefly mentioned the estate tax and how increasing the exemption in tax reform has helped small businesses and family farms. There was no discussion of charitable issues.

Late last month, House Ways and Means Chairman Richard Neal (D-MA) said the tax-writing committee could still try to move a package of expired tax breaks, known as “extenders,” sometime early this year. Senate Finance Chairman Chuck Grassley (R-IA) reinforced Chairman Neal’s comments soon thereafter, and added that the appropriations legislation needed to keep the government running past February 15 would be a logical vehicle for which to include them.

Just last week, both Chairman Grassley and Ranking Member Ron Wyden (D-OR) indicated they were still gauging interest in the House to get extenders legislation done, but there wasn’t the same level of interest as in the Senate.

Bottom line: Extenders are historically controversial due to their temporary nature, but both tax chairman suggesting they could get something done is a sign of bipartisanship on a tax bill that we haven’t seen in a while, and it could perhaps create an opportunity to get other tax priorities over the finish line, such as technical corrections and other fixes to the 2017 tax bill.

As you may recall, the AGI glitch on cash gifts will require a fix, as well as the UBIT on parking and transportation benefits. Although UBIT is not an ACR priority issue, we are monitoring this because it is high on lawmakers’ priority lists. You can read our recent blog post on the issue here.

Consistent with colleagues’ calls to impose higher taxes on the wealthy, Senator Bernie Sanders (I-VT) introduced a bill in late January that would expand the federal estate tax to apply to estates worth more than $3.5 million, compared to the current $11 million threshold. It would also impose a 77 percent tax rate on any amount inherited over $1 billion.

On the other side of the aisle, Senate Majority Leader Mitch McConnell (R-KY), Senate Finance Chairman Chuck Grassley (R-IA), and Senate Majority Whip John Thune (R-SD) proposed a bill to repeal the federal estate tax completely. The argument is that the estate tax is double taxation on assets for which tax was already paid when they were acquired.

Bottom line: These are two very different proposals, but both signal a desire to make more changes to the tax code, specifically in how the wealthy are taxed. ACR does not have an official position on the estate tax, but we continue to monitor legislation due to its impact on planned giving. 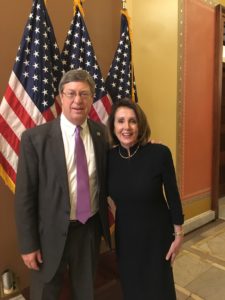 Last week, ACR was joined by former Congressman Ben Chandler, president and CEO of the Foundation for a Healthy Kentucky, and member of the ACR leadership team, on Capitol Hill to meet with key members of leadership and the tax writing committees. Mr. Chandler served Kentucky’s 6th Congressional District from 2004 to 2013.

We appreciate Mr. Chandler joining us and certainly encourage all members of the charitable sector to meet with their elected officials. One such opportunity will present itself in March for the Annual Foundations on the Hill event, which you can read more about below.

You can also read more about this visit on our blog.

Foundations on the Hill

On March 12, in conjunction with Foundations on the Hill, ACR will hold a Leadership Breakfast, which will include the ever-popular congressional staff panel to share what Congress could address this year on nonprofit issues. Speakers will be announced in early March.

Ben Gose, a regular contributor to The Chronicle of Philanthropy, authored an article about how wealthy donors are choosing to form LLCs to achieve their philanthropic goals instead of forming a traditional private foundation. We thought you might find it interesting. The full article can be found here.

The Association of Fundraising Professionals (AFP) recently conducted a poll of its members on 2018 fundraising trends. We published a blog entry about the results, which can be found here.

For us, the glaring headline reads “a fading culture of giving in America.” The respondents reported fewer donors and larger gifts, a trend we’ve seen persist since 2006.

This should alarm lawmakers and nonprofits alike. In the most charitable nation in the world, we should be increasing the number of charitable donors to foster a culture of giving. And that starts with tax policy.

Tax incentives exist because they work to encourage behavior of which we want to see more. Lawmakers should take the opportunity in a new Congress to reverse the trend of donors dropping off and work together to strengthen civil society in a country that relies on it.