>> Federal: CHARITY Act Reintroduced
>> Federal: New Tax on an Employee and Officer’s Compensation
>> Federal: What We Learned from Congresswoman Jackie Walorski (R-IN)
>> Other News You Can Use: The SECURE Act
>>Federal: Roadmap for Action
>> Top Reads: Donor Advised Funds for Impact Investing

On May 16, Senators John Thune (R-SD) and Bob Casey (D-PA), both members of the Senate Finance Committee, reintroduced an updated version of the Charities Helping Americans Regularly Throughout the Year (CHARITY) Act (S. 1475). This is the third iteration of the legislation that addresses several charitable priorities, including two of ACR’s top issues: simplifying the private foundation excise tax to a flat 1 percent and expanding the IRA charitable rollover to include distributions to donor-advised funds (DAFs). Senators Pat Roberts (R-KS) and Ron Wyden (D-OR) are original cosponsors. You can find a summary of the bill here.

Now that the legislation has been introduced in the Senate, ACR is helping find cosponsors to support the bill in the upper chamber. Check out our Roadmap for Action to find out how you can advocate for this positive legislation with your local lawmakers.

In the House, options include introduction of the same legislation or perhaps broadening the bill to include additional provisions. Several provisions from the CHARITY Act have already passed the House in other legislative packages, including the private foundation excise tax simplification and the mandatory e-filing of Form 990.

New Tax on an Employee and Officer’s Compensation

As you may recall, the Tax Cuts and Jobs Act included a new provision that imposes a 21 percent excise tax on foundations on compensation over $1 million paid to employees and officers. Included in that $1 million is compensation received from “related organizations.”

The Treasury department released interim guidance, Notice 2019-9, to assist taxpayers when applying the new tax. While the Notice answered some questions it also raised new questions and concerns. The guidance, which is very broad, requires foundations to add together compensation paid to employees and officers from non-foundation sources with their foundation salaries (even those of volunteers) to determine whether the foundation owes a 21 percent tax on amounts over $1 million.

The effect of the Notice is not just financial. It could chill interest in working as an executive at a nonprofit if you’re already a business leader, and therefore has real implications for meaningfully engaging in civil society. Following a meeting with the Treasury department, ACR was asked for comments to Treasury to better understand the complexity and impact associated with this rule, and we plan to submit comments in the coming weeks.

ACR is hosting a meeting later this week for several leaders from the nonprofit sector with the Ways and Means Committee staff to share our collective concerns with this new tax. We plan to press the Committee to add this issue to its list for an upcoming hearing on how the charitable community is faring after tax reform.

What We Learned from Congresswoman Jackie Walorski (R-IN)

On May 13, ACR staff and local nonprofit leaders met with Rep. Jackie Walorski (R-IN) in her Mishawaka, Indiana, office to discuss recent trends around charitable giving and how Rep. Walorski can help the sector increase its participation. As you may recall, Rep. Walorski is the ranking member of the Ways and Means Subcommittee on Worker and Family Support, which is led by Rep. Danny Davis (D-IL), who is the lead sponsor of the universal charitable deduction legislation. 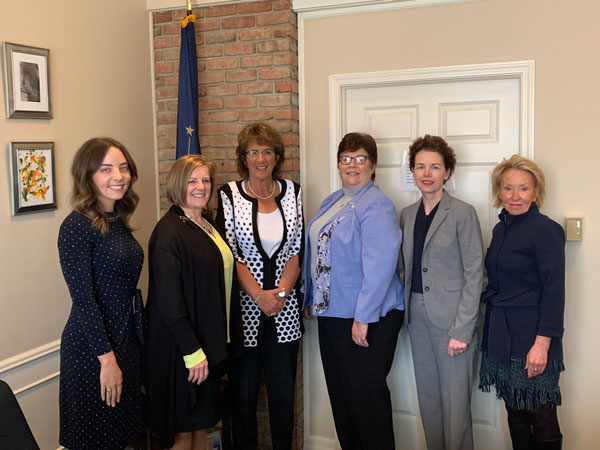 Reps. Walorski and Davis work closely on various legislation to build bridges out of poverty. During the August work period, the two members will be touring each other’s respective districts and working on mutual priorities. Rep. Walorski assured attendees that this issue would be on the list.

As you may recall, lawmakers have made an effort this Congress to advance three separate tax items that have bipartisan support—retirement legislation, tax extenders, and IRS reform. Last week, the House passed its retirement package, the SECURE Act, which includes a provision that would undo a tax on survivor benefits for children of fallen soldiers implemented as part of the 2017 tax bill. Given its broad support in the House—it passed on a 417-3 vote—it is widely expected to pass the Senate shortly.

As of now we don’t anticipate the retirement package that clears the Senate to include additional tax provisions, as Senate Finance Chairman Chuck Grassley (R-IA) has said the legislation would not be used as a vehicle for other tax priorities, like technical corrections or tax extenders. However, it’s still possible other fixes, such as a repeal of the UBIT on parking and transportation benefits, could be tacked on to other tax legislation moving later this year.

As you may recall, ACR has a new Roadmap for Action for the 116th Congress, which offers a 12-month plan to engage with lawmakers and influencers in your community and in Washington.

April’s action item is to write a letter to the editor of a local paper about charitable giving and how you are engaging in your community and with lawmakers. As May approaches, also consider requesting an in-district meeting with your local Congressman to discuss issues affecting the charitable sector. You can find all the resources you need here.